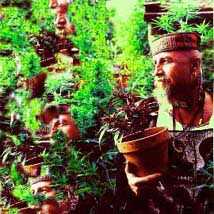 I got the news Sunday, March 31, 2002 that my friend and collaborator Edmund J. Wood had died that Easter weekend. Born in '51 in NYC and raised in the Bronx, he died of a heart attack at the age of 51. His wife Kira said he died peacefully, with his hands positioned "like a Buddha."

Some years ago, after suffering a nearly fatal heart-attack during which he was declared dead for 4 minutes, he moved to Switzerland to get away from the rat-race of NYC. He met his beloved wife Kira there, and together they lived a creative and happy life, growing pot, playing music, and making art. In recent years he recorded himself prolifically on his 4-track, offering about 30 tracks on his own MP3.com site. Recorded pieces on his site run the gamut from Latin to free jazz. He played completely unique guitar, both acoustic and electric, in a style reminiscent of James "Blood" Ulmer. Edmund also played very free fretless bass.

Eddy and I collaborated on a long-distance 4-track project, for which he played his fretless bass and I played electric guitar; he recorded his tracks in Switzerland, I recorded mine in LA.

It was an exciting creative collaboration for me, both because I admired him as a guitarist, and because all the pieces were completely improvised. Neither Edmund nor I listened beforehand to what each other laid down. He introduced me to his idiosyncratic but very effective improvisational overdub process.To begin with, I improvised a guitar track and sent the tape to Edmund to add to. He said he "smoked a fat one" and improvised fretless bass parts over what I played (without listening to my track first). In a second step, he mixed in 126-beat "implied time" drum loops he had previously created for different pieces. He threw in the drum tracks more or less at random. He then REMOVED my initial guitar track and sent the tape back to me, combining his two drum and bass tracks into one track. I stuck the tape into my own 4-track (without listening to his track first) and improvised over what he'd improvised over my now erased improv.

I suppose we could have kept recording and erasing ad infinitum, but we mixed one of the pieces on this end and I named it, "I'm Melting." Click the song title to hear the piece. One of the most bizarre aspects of the recordings I did with Edmund was that there is nothing on the recording to sync up the digitalized tracks -- no count-ins. When the analog recording was converted to digital, my partner Mark and I synced it completely by ear, comparing it with the analog until it sounded the same. On my end, about 5 tracks were recorded using Eddy's process; previously, due to the time-intensive mixing procedure on the LA end, Mark and I had only mixed one track. Eddy also mixed some of our collaborations, and had a track of ours up on his MP3.com site. But that's history now, due to the death of MP3.com.

However, recently Mark and I acquired some new software which allows us to convert from analog to digital much more easily. We mixed a second track from this collaboration and it'll be up soon. I would like to put out an EP when we get done with the mixing process.

Opinionated, provoking, creative, eccentric, energetic, communicative, generous, Edmund completely broke the bounds of conformity. He touched many of us with his beauty and genius. It was an honor to collaborate with him; he influenced me profoundly, for which I will always be grateful.

Review I wrote of Edmund J. Wood's music for ModernJazz.com, another site that's disappeared into cyberspace.