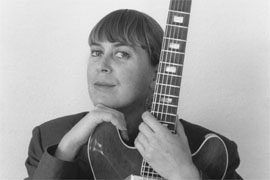 Most musicians regard music from a player's stance, while singer-songwriters generally focus on (surprise!) songwriting. But Altadena jazz guitarist Kimi Reith approaches music from the perspective of someone for whom composition is an element of performance.

"[Jazz musicians] improvise, we're able to utilize [composition skills] while we play," she says, "so that's truly interesting ... you just make these instantaneous decisions. Partly they come from stuff you,ve absorbed and partly they,re a statement of who you are inside." Reith, who'll play at Buster's Saturday night and once a month thereafter through March, will present four of her own pieces Saturday alongside standards like "Stella By Starlight," "My Romance" and Charlie Mingus' "Goodbye Porkpie Hat." (She cites Mingus, Wayne Shorter, Joe Pass and bass clarinetist Eric Dolphy as influences.) She's putting together a trio for future performances in support of an original album she hopes to release by year's end. Its 11 tracks are thoughtful yet playful explorations one Listen.com reviewer characterized as "post-bop." Laughing, Reith says she prefers the description "creative jazz," because she's "trying to approach it from a more creative place."

That was partly her motivation for moving here after seven years of moderate success in San Diego; she wanted to collaborate with musicians in tune with new music and modern jazz. "Jazz should evolve," she says.

"It's like Latin -- Latin's a dead language because it didn't evolve, it wasn't alive with what the people were doing. Compositionally, I'm just trying to go [forward] with my feet in jazz tradition, but to move from who I am as a person, now, inside."

Her San Diego years were preceded by nine adventurous months overseas in Paris, where she lugged gear down 108
steps from her garret and honed performance chops playing
in the streets, and three months teaching in Prague.

Escalating illness forced her return to the States, where she was diagnosed with Hodgkin's lymphoma. Now, more than five years later -- and thus officially cured -- she says she's "convinced that music is healing. I went through seven months of chemo, and [practicing] was the one time of day that I felt energy and actually felt good."

She enjoys jamming with vocalists on occasion, but prefers instrumental music's wordlessness: "If you want to say something in words, you can say it to someone or print it or write it. But all the meaning in [instrumental music] is aural, so it's like you communicate something to people that can't be said in words, which is so cool. That's what's distinctive about music and art."